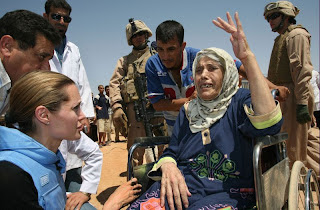 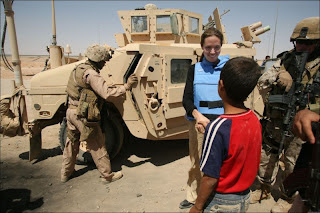 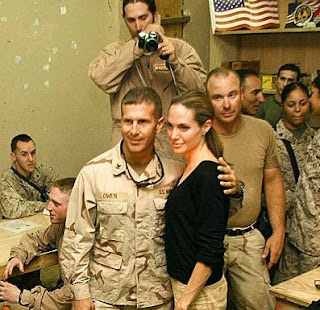 DAMASCUS, Syria, August 28 (UNHCR) – UNHCR Goodwill Ambassador Angelina Jolie has visited Iraq and Syria to see first-hand the plight of hundreds of thousands of families uprooted by the conflict in Iraq.

The UN refugee agency estimates more than 4. 2 million Iraqis have left their homes – 2 million to neighbouring states and another 2.2 million displaced inside Iraq.

Yesterday in Damascus, Jolie visited a UNHCR registration centre and spent hours talking to Iraqi refugees in their homes. Today, she crossed into Iraq to visit 1,200 refugees trapped in a makeshift camp at the border, unable to flee Iraq, and later watched scores of Iraqis crossing into Syria at a border checkpoint.

As a UNHCR Goodwill Ambassador, Jolie said she would leave politics to others while focusing on the region's huge humanitarian needs.

"I have come to Syria and Iraq to help draw attention to this humanitarian crisis and to urge governments to increase their support for UNHCR and its partners," Jolie said. "My sole purpose in both countries is to highlight the humanitarian plight of those uprooted by the war in Iraq."

After talking with some of the stranded refugees at Iraq's Al Waleed camp on Tuesday, Jolie said: "it is absolutely essential that the ongoing debate about Iraq's future includes plans for addressing the enormous humanitarian consequences these people face."

While in Iraq, she separated from UNHCR to visit privately with US troops and other Multi-National Forces based in the area.

Jolie arrived in Syria on Monday. In Damascus, she met some of the thousands of Iraqi refugees registering with UNHCR, nearly one-quarter of whom are victims of violence and torture. Tens of thousands are without jobs, and many young people are in danger of losing out on an education and a future. She recognized Syria for its open borders and generosity to Iraqis.
In late July, UNHCR and the UN Children's Fund (UNICEF) launched a joint US$129 million education appeal aimed at getting 155,000 young Iraqi refugees throughout the Middle East back into school. The United States announced Tuesday that it will contribute US$30 million to the appeal.
مشخص و مبرهن است که این عکسا رو من نگرفتم اما از اونجایی که خبر جالبی بود و عکسهای جالبی هم داشت تصمیم گرفتم که عکسهای انجلینا رو اینجا بذارم تا حالشو ببرید
ارسال شده توسط mojtaba
Email ThisBlogThis!Share to TwitterShare to FacebookShare to Pinterest